Must know facts about the Andean cock-of-the-rock

A guide to Peru's cutest bird

Is the Andean cock-of-the-rock, the best reason to visit Peru?

I have to admit, I was absolutely stunned when I found out that humans were not the only species on the planet that competes for sexual partners, low and behold I recently learned that males from the Andean Cock-of-the-rock (Pun intended) species compete for female partners among their fellow birds. Now just as our fellow men try to impress the ladies with money, power, and materialistic, the fellow Cock of the rocks show off their colorful orange plumage, jumps around,  jump up,  jump up, and get down, Jump, jump-oops sorry back to what I was saying, and sings some nice tunes for the ladies to get their attention in order to mate.

The bird is truly a beautiful and colorful creature, well again the male is. The female’s characteristics are different from the male ones. While the males a beautiful orange, the females are ugly brown. 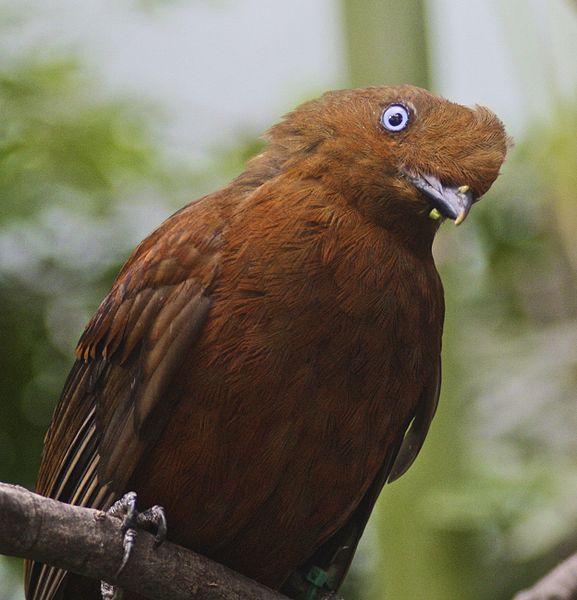 Why do you call me ugly?

They are native to the Andes and are currently pretty large in numbers, nowhere near extinction. So this leads me to the conclusion that competition among mating in species could actually be a good thing. Now onto the bad things about the birds mating, which actually has some similarities with humans as well, unfortunately.

Once the male wins the ‘whos getting laid’ competition, they proceed to mate with the female and then its “ima just go to the store to get some cigarettes” time and daddy never comes back. Now what’s interesting about this is that it points out the fact that whenever this happens with humans its seen as a bad thing and unethical, which in my opinion it is but if it’s ok for these birds to be deadbeats than why is it looked down upon with humans? Aliens only know the answer but whatever bit of position they mixed when they created us, they spilled the whole bottle when they cooked these birds because it’s not just a percentage of the cock of the rock population that does this, its the whole freakin species.

Imagine traveling through space only to find a planet filled with single mothers and fathers that just go around showing off their orange head, bopping and whistling just to smash then it’s onto the next. I do find it shocking but unsurprising at the same time. I mean this is nature we are talking about, it’s something that has to be so pure and so innocent only to find out that the whole cock of the rock species is a bunch of deadbeats.

One other thing that I found to be interesting as well as the fact that the females are mostly brown in color.

Aliens made the female have not one beautiful thing about them and dumped the beauty potion into the male stew. I have to say that out of all of the bird species in South America this is truly one of my favorites simply because of the beauty. Among the toucan and a majority of other birds found in the region, this bird is one that will catch your eye if you ever find yourself exploring the Andes.

I mean how can you not miss it when everywhere everything is green and gray, and here you have a big orange head poking out a tree.

The things I didn’t find that interesting about the bird is that it really doesn’t have anything special about its diet.

The birds mostly consume common things that a bird would consume such as fruit and insects. Now as far as what consumes this bird is quite interesting. Everything from other flying animals to freaking jaguars is attacking the poor cock. 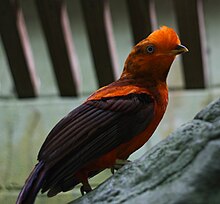 This is where their orange head does not come in handy. I mean if you’re out in the jungle and you’re minding your own business, your orange head is basically yelling eat me I’m right here to other predators.

If you were thinking of going to Peru to eat one of these birds, please don’t because killing these creatures will put them closer to extinction. The thing about these birds is that they eat fruit and so when they come out the other end they are actually planting seeds with fertilizer what a plus!

I wonder if these birds would even survive in the united states.

I imagine that the climate might kill them, I mean there has to be some reason these birds stay in South America. Going back to the idea that these birds compete with each other for mates I must say that I wish things were more violent in the way they compete. Like why are we the only species that created the gladiator fights in the dome of Rome? Things would be much more interesting if the cock of the rock decided to create a dome-like nest with seating and other birds walking up and down the aisle selling fruit and insects instead of hotdogs, two birds go at it in the center while the female sits on the throne waiting for the winner.

Come to think about it, how do we know this doesn’t happen? I mean these birds are isolated in the jungle with very limited human witnesses, for all we know there is a cock of the rock beheading a fellow male Mortal Kombat fatality style, we do not know these things because the absence of evidence does not mean that it’s the evidence of absence. When it comes down to it, humans and the cock of the rock are similar in some ways.