Peru is the home of more than 1800 and more diverse varieties of birds – one-sixth of the planet’s total, including 106 endemics. It is a magnificent nontropical birding destination in South America. Approximately all eco-lodge in the Amazon Basin records over 600 bird species in their property. Ever since I desired to go out for the bird-watching voyage in Peru, I convinced myself that I’ll rewrite about all the various birds that I was worthy of witnessing and the ones I missed. I will recapitulate to write about the lodges that are most convenient for my fellow-travelers; I’ll pen about the animals that I was able to see, and of course, my complete trip. 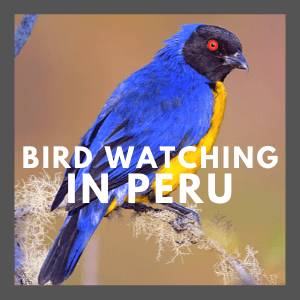 Honestly, as I prepared for my trip, I couldn’t help but wonder: What are the different birds that will be able to witness? Now that I’m back, let’s see what happened when I touched the ground of Peru.


First, let’s begin with the common birds. When you travel to Peru you are virtually guaranteed to find these birds as long as you are on the right side of the Andes.


These are the birds I missed the most during our trip, so I’m calling them Missed Birds. I’ll exclude species we heard, even though it certainly makes a difference if you hear or see a Crested Quetzal or a Grey-breasted Mountain-Toucan.

Last but not the least, Suprise Birds were some of the birds we least expected to see. Here are the ten surprise birds –  When you travel to Peru you are virtually guaranteed to find these birds as long as you are on the right side of the Andes.


If you liked this article, check out my other article about 17 cutest animals of Peru
Animals In Peru That You Must See in Peru